To open the map, click in the rectangle at the top right. It is an interactive map that allows you to visualize this route in the context of France. The circles correspond to the end of each stage. By clicking on these circles, you will have access to the information that Google gives for these places (images, some accommodations, routes, etc.). It could also help you sometimes, even if this information is more for people who drive around, not on foot, like you ……

Here are the stages on Via Gebennensis. Click on the stages to open them:

You can either enter the stage of your choice or follow the navigation from one stage to another. Have a good trip.

The Ways of Compostela in Rhône-Alpes

There are several routes from Germany, Switzerland or the countries of Eastern Europe to reach Puy-en-Velay, which many people mistakenly consider as the start of the Camino de Santiago, although it is the most traditional gathering place for pilgrims to Compostela in France. As Switzerland is a kind of hub in Europe, the majority of pilgrims, especially from German-speaking countries, generally arrive in Geneva, at the end of the Via Jacobi. To them there are then several avenues:

In addition to these three routes, there are routes which pass through Alsace, Franche-Comté and Burgundy and Cluny. From these routes, you can also reach Le Puy. From Switzerland, a track starts from Basel to join these tracks.

The Friends of the Chemins de Compostelle en Rhône-Alpes have published very useful little guides, essential for finding accommodation, perhaps less useful for the routes, on these various tracks. Without them, you would be lost, and you would walk on these tracks with great difficulty. 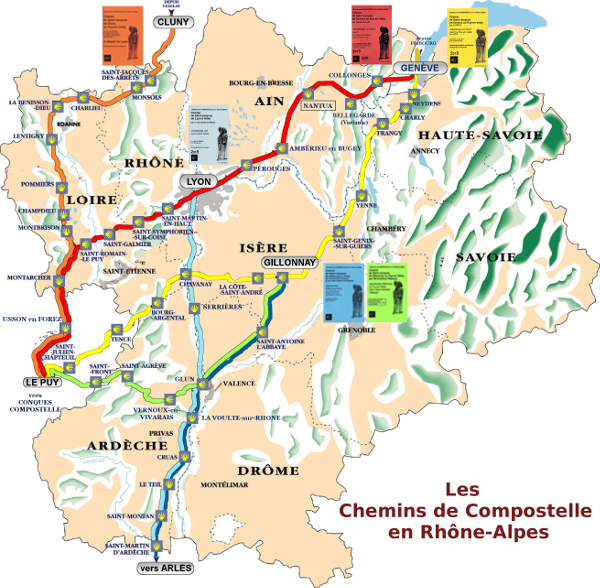 For German-speaking pilgrims, the Via Gebennensis remains the reference route. There is an obvious reason for this state of affairs. There is a very well documented brochure in the Outdoor collection called: Frankreich, Jakobsweg, Via Gebennensis. This brochure contains a description of the routes, in itself not very useful, but the maps are well done and the information on the accommodation validated. But here it is in German. Since 80-90% of the pilgrims who take this route speak or understand German, being Austrians, Germans or Swiss Germans, this is not a problem. The French-speaking Swiss would be supposed to understand it too! A landlord on the way confirms that his clientele is 80% German-speaking, even if he does not speak a word of German. French speakers, and even Germanic (some names are translated into German), can also acquire in the collection “Chemins de Compostelle en Rhône-Alpes”, the little yellow booklet entitled “Chemin de Saint-Jacques de Genève au Puy-en- Velay, by the GR65, Yenne and Chavanay ”. This collection, as we said in the general introduction, is the most complete on the often-rare dwellings along the way.

Rarely more than 10 people walk per day on Via Gebennnesis, but it remains the most used route to reach Le Puy. On the other routes, you will no doubt find yourself alone, or you will find people leaving from their region, in France, to reach Le Puy. Will the other routes that leave from Switzerland one day, including Via Adresca (variant of Gillonay) or Via Lugdunum, also be covered? Yes, but only then if German-speaking pilgrims will have guides written in German for these routes in the future.

The Via Gebennensis follows the course of the Rhône River for quite a long time, more or less closely. In the first part, it is the hills and forests dominating the river. It is especially the department of Haute-Savoie that the route crosses, marginally Savoie and Ain. Beyond Yenne, when the track passes through Tournier Pass, the route switches for several stages in the department of Isère. It then walks on the hills shaped by the Rhone glacier and the Isère glacier which, by advancing and retreating, have created here wide valleys and moraines where pebbles emerge. When the route further joins the Rhône River, which in the meantime has gone to bathe in Lyon, near Chavanay, then the landscape changes dramatically. You definitely leave the Isère, the plain and the Rhône River for the Loire, then the Haute-Loire with its high hills, its forests, even small mountains and you head gradually towards the small puys which make the charm of Velay. From Geneva to Puy, count almost 15 days of walking.

It is not necessary to carry detailed topographic maps with you. Just follow the markup. As the Chemin de Compostelle merges with the Grande Randonnée track, the direction is also very often indicated by the red and white marks of the GR. Here, it’s easy, you follow GR65 path up to the French border.

You have to follow the red and white bands, not the yellow lines (some tourist trails are marked in yellow!). But it sometimes happens too. A smart kid who for fun would have changed the signage or removed a sign. And off you go for a good detour or to ask for directions to a neighboring farm. And then, depending on the region, there are still plenty of other signs with the names of hamlets, with approximate walking times, intended to inform tourists of local routes.

There is also sometimes a markup using the famous Compostela shell, yellow on a blue background. But, the shell is not very presnt on Via Gebennensis. 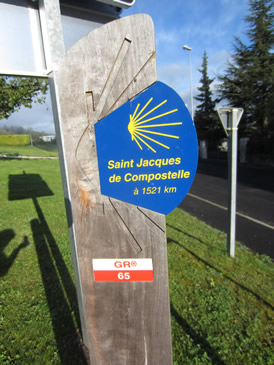 It is very difficult to specify with certainty the slopes of the routes, no matter what system you are using, GPS watches or mapped profiles. There are few sites on the Internet that can be used to estimate slopes (three at most). Since these programs are based on an approximation and averaging around the desired point, there can be large variations from software to software, due to the variation between two points (e.g. depression followed by a very close bump). An example? On GR36 pah, along the Breton coast, the altitude is rarely higher than 50 meters above sea level, but the route continues to climb and descend all day. For a course of about twenty kilometers, a software will give 800 meters of slope variations, another 300 meters. Who is telling the truth? For having done the course several times, the legs say that the difference in altitude is closer to 800 meters! So how do we do it? We can rely on the software, but we have to be careful, take averages, ignore the slopes given, but only consider the elevations. From there, it is only elementary mathematics to deduce the slopes, considering the altitude and the distance traveled between two points whose altitude is known. This is the way of doing things that has been used on this site. Moreover, in retrospect, when you “estimate” the route calculated on the basis of the cartography, you notice that this way of doing things is quite close to the truth on the ground. When you walk often, you quite quickly have the degree of tilt in the eyes, and especially in the legs.

But there is more to this. The programs that allow you to calculate height differences lack precision for relatively flat routes, often not considering small variations of less than 2 meters. Therefore, and especially for sections with less than 5% gradient, you will have the feeling that it is almost flat, but this is not always correct. It can slope up and down often imperceptibly. But your legs are registering all of these movements. So, to be closer to reality, add 100 to 200 meters of elevation gain and loss for most of these stages. Some GPS watches that continuously record the path will also tell you the same. But here, too, GPS is not the precision of a Swiss watch.

We understand the difficulty of the exercise. Having made the experiment several times with two different GPS, also giving the altimetry, we can sometimes find a great variation in the level of the indicated altitude. The only true figure is that given by the contour lines of the official maps of the states. But, this should not spoil your pleasure in any way, even if you are given figures that will be said to be approximate, but no doubt quite close to the reality on the ground. In the graphics, it is enough to consider the color to understand what it means. Light colors (blue and green) indicate modest slopes of less than 10%. Bright colors (red and dark brown) show steep slopes, with brown exceeding 15%. The most severe slopes, greater than 20-25%, very rarely more, are marked in black.

What you will find in this site

To aid in route planning, the route has been divided into arbitrary units. Everyone walks in their own way. For each stage, you will also have accommodation options available. We cannot ignore the existence of Miam Miam Dodo, whom many consider to be the bible of the Camino de Santiago. Our site is very complete in addresses, but does not give accommodation outside the track, which Miam Miam Dodo does, which also has the undeniable advantage of being updated every year.